Harry Edward Styles (born 1 February 1994) is an English pop singer and actor, known as a member of the boy band One Direction. He made his debut as a singer with his band White Eskimo, who performed locally in Holmes Chapel, Cheshire, England. In 2010, Styles auditioned as a solo artist for the British television series The X Factor. Their debut single "What Makes You Beautiful" debuted at number one on the UK Singles Chart, and has since sold over 5 million copies worldwide, making it among one the best-selling singles of all time. 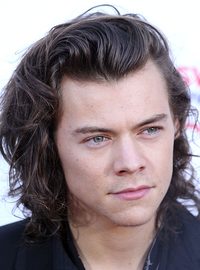 image credit
Harry Styles by Eva Rinaldi, is licensed under cc-by-sa-2.0, resized from the original.