Crispin Hellion Glover (born April 20, 1964) is an American film actor, director, screenwriter, recording artist, publisher, and author. Glover is known for portraying eccentric people on screen such as George McFly in Back to the Future, Layne in River's Edge, unfriendly recluse Rubin Farr in Rubin and Ed, Andy Warhol in The Doors, the "Thin Man" in the big screen adaptation of Charlie's Angels and its sequel, Willard Stiles in the Willard remake, The Knave of Hearts in Alice in Wonderland, Phil in Hot Tub Time Machine, and as a Willy Wonka parody in Epic Movie. He is also the voice of Fifi in the Open Season franchise and appeared in the screen adaption of the Elmore Leonard novel "Freaky Deaky". Everything is Fine! Glover tours with his movies and is currently supervising the building of sets for his next productions at property he owns in the Czech Republic. 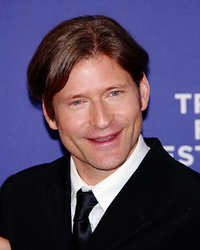 image credit
Crispin Glover by David Shankbone, is licensed under cc-by-3.0, resized from the original.