Elizabeth II (Elizabeth Alexandra Mary; born 21 April 1926) is the Queen of 16 of the 53 member states in the Commonwealth of Nations. She is also Head of the Commonwealth and Supreme Governor of the Church of England.Upon her accession on 6 February 1952, Elizabeth became Head of the Commonwealth and queen regnant of seven independent Commonwealth countries: the United Kingdom, Canada, Australia, New Zealand, South Africa, Pakistan and Ceylon. Her coronation the following year was the first to be televised. From 1956 to 1992, the number of her realms varied as territories gained independence and some realms became republics. Today, in addition to the first four of the aforementioned countries, Elizabeth is Queen of Jamaica, Barbados, the Bahamas, Grenada, Papua New Guinea, Solomon Islands, Tuvalu, Saint Lucia, Saint Vincent and the Grenadines, Belize, Antigua and Barbuda, and Saint Kitts and Nevis. She is the world's oldest reigning monarch as well as Britain's longest-lived and second longest-reigning head of state. 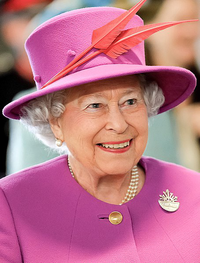